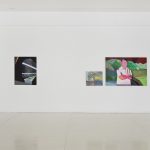 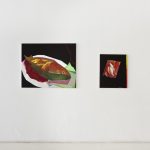 Gao Ludi will present his latest works at “gū dú”, his first solo exhibition in White Space Beijing.
It has been Gao Ludi’s primary concern to focus on and explore the pictorial language as medium. Color, images and style often go beyond the set theme. By means of his own body, the artist tries to shape painting as language presentation that roams and evolves in different spaces
As title,“gū dú”, equivalent to “loneliness” in Chinese (孤独), is the motive for his recent paintings that vividly depict his inner world while he is painting and his (his peers’s as well)state of mind while he is in contact with others in his family and society. He surfed the Internet for pictures with the three entry words, i.e.,“孤独”, “gū dú”, and “loneliness”, and depicted them in a selective way, thereby adding a dimension of rule to art as game, as well as revealing the unimaginable difference that words of similar meaning can have in a graphic world. He also employs sticks in his paintings, as well as plenty of lines, so that the traces left by the sticks can generate inexplicable mysticism in the definite and indefinite contrast.
Gao Ludi, born in 1990 in Henan, graduated from Oil Painting Department, Capital Normal University in 2013. Currently lives and works in Beijing.