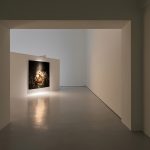 We are delighted to announce the opening of Wang Tuo’s first solo exhibition at WHITE SPACE BEIJING on April 7th, 2017. This exhibition will showcase the artist’s latest creations, in the eclectic mediums of video, performance, and painting.

By intertwining unscripted lived experiences as told by ordinary people with the dramatized archive of predetermined situations performed by actors, Wang’s artistic practice reveals the unstable relationship between the contemporary circumstances of human beings and their cultural heritage. Based on references to existing archives (including literature, film, drama, and art history), his work constructs a maze of melodrama with multilayered narratives – presenting humorous yet dramatic components of contemporary society through the lens of absurdity. The artist focuses on how artificial concepts and ideologies are derived from their historical contexts, and how they adapt to the constantly shifting social conditions.

The exhibition highlights the intertextual relationship between the video works –Addicted; Roleplay; Real and Natural – and one group of paintings, exploring the substantiality of artificial concepts and demonstrating how universal ideologies in the contemporary world are shaped, replicated, and reinforced. In response to what Roland Barthes referred to as “myth” in Mythologies, a narrative with ideological motifs is developed, suggesting an all-encompassing condition that could not be surpassed. The artist aims to create a visual documentation of the present situation out of details gleaned from his archival research.