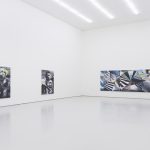 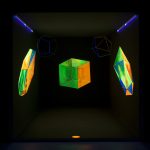 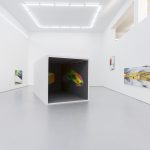 We are delighted to announce the opening of JIAN Ce’s fourth solo exhibition at WHITE SPACE BEIJING, The Grand Illusion will open on December 17th, and presenting her recent works in painting and installation.

The exhibition, whose title alludes to Jean Renoir’s film classic La Grande Illusion (1937), includes two groups of recent paintings, Guided Tour and New Folks, and the installation King of My Castle, which is an isolated walk-in room within the exhibition space.

In Guided Tour, JIAN Ce leads the viewer through a course of site-specific paintings showing anamorphous versions of famous artworks, such as Velázquez’ 17th century portrait of Infanta Margarita, a view of Montagne Sainte-Victoire by Cézanne, a woodcut by Dürer from his artist tutorial Unterweysung der Messung (1525) and Duchamp’s last painting Tu M’ (1918).

While genres like the portrait or landscape are commonly accepted as ‘painting’, they also represent its obsolete function, whereas the groundbreaking abstraction of Mondrian and Stella or conceptualism of Polke and Duchamp reflect its historical discourse and self-understanding. By dictating ideal viewpoints, the artist ironically quotes a typical museum experience, with a guide telling you how to look at artworks.

Following her previous perspectival landscapes, these works take a further step in linking the flat medium to the viewer’s actual space. They don’t copy, but re-stage iconic paintings as virtual images, raising the question of what and where the painting is: Is it the image within or the composition on the canvas in front of you? It’s a question as old as painting’s illusionism itself – but in the context of today’s digital imagery, old optical techniques and perspectival distortions gain new relevance.

This is also the issue in the black box situation of King of My Castle, where geometric Platonic solids are shown as anamorphous constructions and wall paintings, creating a hallucinatory model of the closed subjective mind.

The series New Folks addresses concepts of the ‘other’ body, as opposed to the normal human (or the viewer him-/herself). The oversized figures are shaped and distorted by the role, culture and gender they represent – and despite the modern or grotesque portraiture, their poses still refer to traditional iconographies of social status as well as projected ideas of the other gender, the foreigner and the freak, famously represented by the Elephant Man.

In times where society, especially in Europe, is changing dramatically due to global migration and refugees, stereotypical images combined with xenophobic wariness are more present than ever. Those New Folks are curiosities, weird strangers and aliens, but they might also form some utopian portrait gallery of enhanced human beings with their anonymous, android-like appearance.

JIAN Ce (b.1984, Shandong Province, China and moved to Germany in 1988) graduated from the Berlin University of the Arts in the master class of Georg Baselitz, Daniel Richter and Robert Lucander in 2008, and graduated from the Humboldt-Universität and Freie Unversität Berlin with a Magister Artium degree in Art History in 2009. From 2006-2007 she studied at Goldsmiths College, London. From 2012-2016 she was a PhD candidate in Art and Visual History at the Humboldt-Universität. Currently working and living in Berlin and Beijing. Recent exhibitions include: Elephant, NON Berlin Project Space, Berlin, Germany (2016);I’m not a robot, Galerie Philine Cremer, Düsseldorf(2016);Our Painting, Yang Art Museum, Beijing, China (2016).