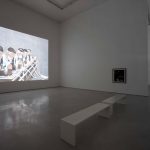 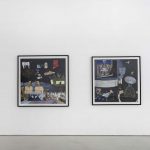 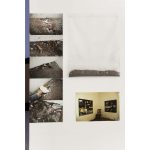 “THE METAMORPHOSIS” is Wang Haiyang’s first solo exhibition at WHITE SPACE BEIJING, featuring two videos he completed in the last three years.
Surrealistic narrative and imaginative transformation combine in his works to build a free world. As an artist, he believes his practice was born of his experience in painting. By repeatedly painting with pigment on the same sandpaper sheets and then erasing the paintings, he does not offer the audience an original painting in the ordinary sense. In the two videos he has finished by now, Freud, Fish and Butterfly (2009) and Double Fikret (2012), we can invariably find something outside the painting reminding us of its boundary (limit). When an image “touches” the framed plane or “intrudes” into another plane, we have actually reached the anxieties involved in the artist’s pictorial experience: the painting is a projection of our inner world on a plane that leads to the loss of the dark depth in the inner world. The experience he gets from animation will surely find its expression in his paintings as well.
Born in Shandong in 1984, graduated from Central Academy of Fine Arts in 2008, Wang Haiyang is now based in Beijing. Double Fikret won silver dove at the 55th DOK Leipzig Film festival and a special award at Montreal’s 11th Sommets du cinéma d’animation; in 2010 Freud, Fish and Butterfly won Grand Prix at the 25th Holland Animation Festival. Both works have been selected at more than 20 international film festivals.