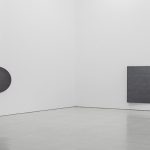 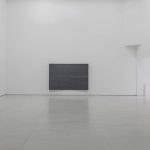 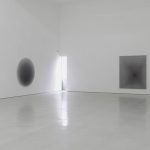 WHITE SPACE BEIJING is pleased to announce the opening of the fourth solo exhibition of Liu Wentao, where his latest paintings will be presented.

Xuan, is black. Black constitutes the general color tone in Liu Wentao’s minimal paintings in recent years. This black drawn from pencils builds a lineage-like characteristic that makes the texture of each painting apparent. Yet, black does not encompass all aspects of Liu Wentao’s paintings, because it is not only the shared “concrete” element of among surfaces of various structures and depth.

As a practitioner of form, for the artist, the void acts as a point of inception for his practice. The black straight lines drawn in pencil do not intentionally attempt to create meaning, but the artist continues to experiment the dialectical relationship in the homogeny of the “void” and “concrete”. In Liu Wentao’s recent experiments with painting, the artist generates spatial forms based on mathematical models, that is both a figurative representation of the “concrete”, while conveying certain infinity that does not suggest the disappearance of the “void”, instead, the possibility that the “void” may engender. As it is stated by Mu Zongsan, “There are two ways of the Tao, one is void, the other is concrete, when they come into a circle as one, become what is referred to as Xuan.”

Liu Wentao was born in 1973, Qing Dao. He has studied at Central Academy of Fine Arts and University of Massachusetts, currently living and working in Beijing. His recent exhibitions include “Inter-Vision – A Contemporary Exhibition Across The Strait”, National Taiwan Museum of Fine Arts, Taiwan; ”Light and Shadow”, Shanghai Art Museum, Shanghai.