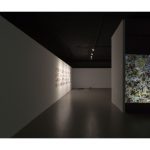 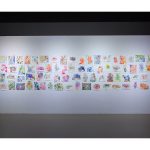 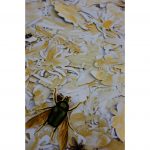 “A monk spends an entire year creating a sand Mandala that he knows is destined to disappear… One might think that there is nothing on this piece of paper. What was there has been erased completely and yet, truly, it represents 1325.5 hours in the life of me, Wang Haiyang.”

In the above quote from the artist Wang Haiyang, he is describing the intense energy required to complete a moving image work, where so little of that toil is visible in the final piece. This, the feat of will that is the artist alone in their studio struggling to realise their ideas, but for Wang Haiyang it is an unavoidable condition for completing the hundreds of drawings made in the course of completing a hand-drawn stop-frame animation. A young artist, he has for some years now been known to the art world for the intricate style of these works. Meticulously hand-drawn sequences yes, but also for the fantastical voyages through worlds in which everything is in a state of flux that they describe. Eschewing conventional story-telling, Wang Haiyang’s narratives spring directly from his subconscious. Perhaps. They also represent his exploration of the general human psychological landscape with its surreal juxtapositions, its symbolic language, and plausible irrationalities that are familiar to us in the form of dream sequences. This is the arena in which the father of psychoanalysis, Sigmund Freud, changed the way we understand the mechanisms of the human mind. For Wang Haiyang, this subconscious mind is a rich repository of inspiration.

In this exhibition, Wang Haiyang presents a new series of works that are altogether different in form and style from his earlier work. One thing that remains constant is himself as resource. Here, the mind combined with the body where the body is the source of physical sensation. It is in this context that the double meaning of “By Himself” as the exhibition’s title finds its mark. “By Himself”, as the author of the works, where every detail is by his own hand. Equally, because the works were created in almost total isolation from the world, by himself being separated from it. The reason for this is that in 2015, Wang Haiyang was required to undergo an operation. Unable to walk, he was unable to leave his apartment. For the better part of a year, Wang Haiyang’s father was his only companion as he worked on his recovery in the isolation of his apartment. This slow and painful process of recovery took Wang Haiyang on a journey that can only be described as penetrating his physical being down to its core. The knowledge that this new experience imparted – primarily of pain and constraint, of deprivation – was underscored by a heightened awareness of life. It inspired, drove, Wang Haiyang to produce this body of new work. Almost entirely abstract in visual appearance, each of these animation works represents a metaphysical dialogue with himself about his state. The result is a poignant and compelling series of works that immerse the viewer in the sensorial experience of physical being.

A most poignant work is Night Feed (2016); a creature from a dream (nightmare) squelching in the dark, but which is a direct visual representation of physical constraint and pain. Conversely, Alive (2017), a perpetual shifting motion of thousands of insects and birds, cut out from magazines, is a realm of teeming life. In a world dominated by news and entertainment predicated on reality in which violence and torture have become commonplace, Wang Haiyang’s work produced in isolation from the world finds extraordinary resonance with it for being real, and bursting with the will to life. The best complement that can be paid to these works is to the incorrigible life-force that makes them examples of true artistic endeavor.