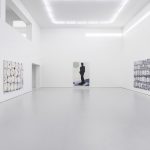 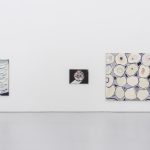 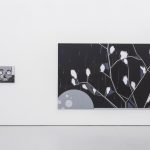 Reflecting upon the previous two bodies of works shown in the solo exhibitions in 2014 and 2015, Gao presents a new series of paintings that anticipates an opening of a “monochrome” reading. Reoccurring here are Gao’s classic motifs – still-life of skulls and other objects, natural landscapes, statues of ambiguous female figures and scenes of eclectic natures – but the works that are now grey, dim, largely colourless and deliberately rendered in a deadpan fashion, are no longer marked by an overwhelmingly self-sufficiency, and even appear to be conceded, made partial and incomplete. It is however less an expression of Gao’s personal experiences than a long-anticipated exploration of the “colourless”: to Gao, this move into the restrained and restrained field of grey after exploiting the expressive and orgiastic means imposing onto himself and expanding the rules and regulations that he employed when working on canvas. In other words, it experiments with a certain reversion of the relationship between art and life, and flips the logic of the remain upside down.

And, it experiments with contours and silhouettes that are further radicalised to the extent that the widely acknowledged comic aspect of Gao’s paintings is now suspended. Still seemingly casual and amusing, the figures and objects depicted are further broken down into forms that are at once irregular and geometrical, and are, paradoxically, only mildly separated from each other. Identification of things, in relation to the profound endeavour of representation or even to the modern legacy of flatness is now replaced by a renewed freedom to play that is necessarily meticulous and solemn.

A catalogue, Gao Ludi, with contributions by Sun Dongdong, Yang Beichen and Li Bowen will be published along with the exhibition.