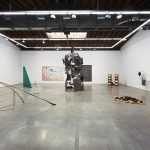 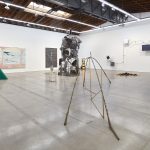 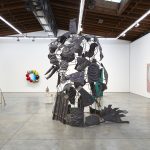 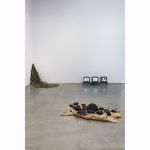 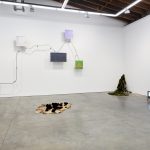 Luhring Augustine Bushwick is pleased to present A Composite Leviathan, an exhibition of new and recent work by twelve emerging artists from China. The diverse practices of these artists defy clear categorization, but are united through a shared investigation into the rapidly transforming landscape of contemporary culture, including the impact of emergent technologies, globalization, and urban sprawl. Organized in collaboration with James Elaine, the Beijing-based curator and artist, this robust exhibition will introduce the New York audience to a new generation of contemporary Chinese artists. Featured in the exhibition are works by He Wei, Jiu Jiu, Liu Dongxu, Liu Fujie, Nabuqi, Wu Di, Yang Jian, Zeng Hong, Zhang Miao, Zhang Ruyi, Zhang Xinjun, and Zhao Yang.

In Biblical terminology Leviathan is a dark creature of immense size, like that of an island rising out of the sea that cannot be subdued by mere man alone. It also can refer to anything of enormous proportions and formidable power, such as international corporations or totalitarian states and their vast bureaucracies. In Yang Jian’s sculpture, A Composite Leviathan, which inspired the exhibition’s title, we see a relic of an intimidating yet tottering state system composed of distinct elements sourced from disparate public sculptures and spaces. It is a jigsaw puzzle of incongruous components that don’t fit together quite right, but beautifully reveal the twisted metal structure within. These ‘cracks’ in the armor represent the lines that have drawn this exhibition together. The focus of the show is not political, thematic, religious, or stylistic; rather it showcases a community of dispersed artists, living in a conflicting system of flux and control, who are drawing the ‘lines’ that let the light in.

Working across media such as painting, video, sculpture, and installation, Yang explores questions of power, social control, the role of capital, and the absurdity of organized civilization. Yang’s monumental sculpture, A Composite Leviathan (2018) is a towering image of a “complete state apparatus.” Sections of public sculptures from Chinese urban spaces such as plazas, parks, and commercial centers are recreated
within the work to form a cumbersome armor that shields an interior structure made of twisted rebar. The puzzle-like pieces do not fit together harmoniously, revealing holes and cracks in the surface of the structure that allude to the vulnerability and uncertainty of a seemingly all-powerful and controlling state
system.