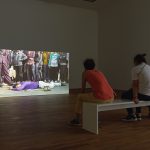 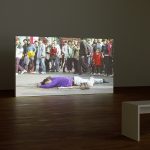 A museum of the present must always be a different one. In a time of constant change and the attending sense of powerlessness, the exhibition Museum seeks to open up and occupy new spaces. Rather than critically questioning the institution, the focus is on exploring its possibilities. With works from the collection, new productions and loans, the exhibition Museum strives to unfurl the current liberties of art and thus of the present museum. Gestures of configuration, transformation and transgression here aid in the endeavour to conceive of — and make perceivable — the Other. The museum is to be understood as a working title.

Li Liao occupies public space with a simple gesture in his Single Bed series (2011). After clearing most of the dirt from the ground and thus marking out a spot roughly the size of a single bed, he lays down (after spending several sleepless nights in preparation) at different places in the city and sleeps until he wakes or is awakened by someone or something else. In A Single Bed No.1 (Optics Valley), random passers-by in the Optics Valley shopping mall become witnesses to an event—a film shooting—from which Li Liao remains aloof in his sleep. For viewers of the video, the behaviour of the passers-by becomes the actual focus of attention. Under the influence of their curiosity, irritation, concern or apathy, or as a result of intervention by the police, the significance of the sleeping body becomes increasingly unclear. Li Liao reveals the irritating effect of the realization that the context assigns no meaning that could contribute to an interpretation of the perceived action. Is sleep a personal matter? Is sleeping in public space permitted, and, if so, under what circumstances? A Single Bed No.1 (Optics Valley) shows that our behaviour in public space is dictated by unconsciously internalized rules and practised behaviour patterns that shape our perceptions and the meaning of a given action. The sleeping body itself becomes a meaningless symbol and embodies the basic question of representation at the same time. Does the body stand for something else or is it simply a meaningless presence? Is the person present in sleep or consciously absent? Exhibited as a work of art, the context of the performance changes once again and the busy shopping mall may call to mind a world in which people can shop, work and communicate round the clock. Thus the sleeping body becomes a gap in the stream of passers-by and—in defiance of the dictates of productivity and consumption—a form of insular resistance.