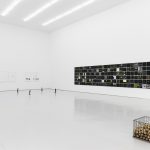 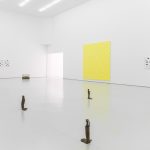 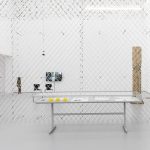 We are delighted to announce the opening of He Xiangyu’s fifth solo exhibition at WHITE SPACE BEIJING on February 18th.This exhibition presents an entirely new series of works by the artist, including paintings, installations, videos, and other forms of media, showcasing a variety of explorations that share the same origin — an everlasting and increasingly deepened deliberation on the motif of cross-cultural, nonverbal manifestations and bodily perception.

The core of this deliberation is presented from two angles: one is extroversive and the other is introspective. A series of videos created in the span of a year documents three independent yet intricately connected happenings. No matter a space is permanent or temporary, its function and dimension are extremely compressed; based on a series of highly compressed yet efficient fundamental rules, a microcosmic social system can be established rapidly, despite its complete divorce from language and complicated process of cultural recognition. From the means of expression in the three happenings, one could easily trace the artist’s origin of creativity from the “Palate Project”. Internally derived from the same origin is an ongoing investigation of “yellow”, a color with multi-layered symbolic meanings. The artist therefore returns to visual perception, using pure visual language to discuss the generation of images and visual mechanisms.