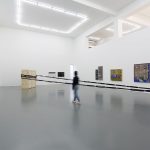 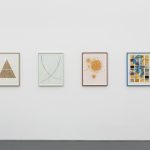 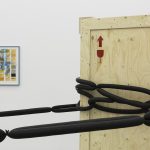 We are delighted to announce Liu Shiyuan’s third solo exhibition at WHITE SPACE BEIJING, In Other Words, Please Be True, opening on March 9, 2019 (Sat.) and will be on view until May 1 (Wed.). With the artist’s most recent works including videos, installation, paintings, and photographs, the exhibition addresses a series of subject matters with regards to the boundaries and correlation of the individual and the collective, the existence of both, their rights and values, etc.

In the left gallery space, the series of works on display constitute on the basic visual systems of the grid (a basic unit we have adopted to observe the world at present – as pixel, screen, lattice windows and houses) that serve as an analogy for the relationship between the individual and the collective. As the grids accumulate and overlap with each other, the specific and subtle moments dissolve and are made abstract, and subsequently restructure into a macroscopic world. Hence, we zoom in on the image and its comprehensive truth. In the six-collaged images entitled A Shaking We, intimate personal experience and the imminent social conditions connect and contradict with each other in a perceptual, emotional and cognitive flux. These moments of ephemerality expand and signal at the subtle, yet disruptive details of reality. The seven paintings on view are hand-drawn graph papers that provide a sensible framework for a world built on reason. Individual lives, social transformation, and historical events are strung together through temporality, spatiality and meaning, by which the artist probes at what is the truth and what are lies; the cruelty in the coming of age, as well as the values of life.

In the other exhibition space, viewers would have to pass through a corridor of a colorfully beaded curtain to eventually arrive at A Sudden Zone at the end. This four-chapter video work lasts 13 minutes 40 seconds, and consists of still photographs and texts strung together through a fictional narration. The moving image begins with a series of family photographs about the arrival of a newborn child. In its background, the viewer’s gaze would follow the stream of images and timeline to slowly sweep over every inch of the baby’s skin and every ridge of his spine. The second chapter depicts a conversation between two young people. The details of the room and the landline telephone offer clues to the time of this everyday conversation – the pre-Internet age. The conversation, at times afloat and others baffling, carries along with the interruptions of poor quality signals and unexpected “eavesdroppers”. After a silent spur, the video transforms into a “river” inundated by a large number of images. Explanatory phrase bubbles around it changed constantly, despite the viewer’s attempt in trying to capture the multiple meanings of each image, he/she would eventually come to realize that such efforts would be spent in vain. This seems to remind us of the uncertainty of the world we confront and the impossibility to seek its constant. As the last piano chord is played and the last image of this stream appeared, the video comes to a sudden stop in complete darkness and silence.