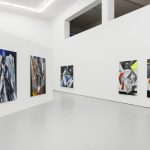 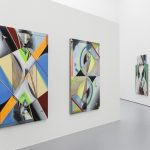 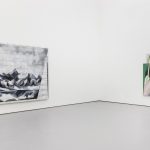 WHITE SPACE BEIJING is pleased to announce the opening of the third solo exhibition of Jian Ce on June 14, titled Projection, where her latest paintings will be presented.

The exhibition theme addresses a basic idea in traditional optics. Projection refers to Leon Battista Alberti’s optical theory of the Renaissance, which describes the relationship between the natural world, the human eye and the picture plane, at the same time providing artists with a handbook and instructions on how to create a perspectival image. The paradox between perspective and our actual visual experience is the main problem Jian Ce discusses in her works.

By setting a vanishing point and a fixed standpoint for the viewer, as well as distorting objects within its system, the perspectival image transforms the natural human experience in order to achieve a more ‘truthful and accurate’ description of reality. The problem of this aim is something Jian Ce tries to reflect critically in her artworks. Drawing on pictorial techniques that were in use before the photographic era, such as compositional principles and grid structures – which are now applied in virtual computer images – Jian Ce creates an internal system within a picture. As images, the abstracted landscapes overcome their dependency on photography and disrupt our viewing habits shaped by photographs. In her figurative works, Jian Ce reduces all personal emotion in order to build up an abstract composition with the basic elements of painting, finding a form by systematically deducing it from the picture plane, thus evoking an ‘inherent expression’.

Jian Ce was born 1984 in Shandong, China, and moved to Germany in 1988. She graduated from the Berlin University of the Arts in the master class of Georg Baselitz, Daniel Richter and Robert Lucander in 2008. She graduated from the Humboldt-Universität and Freie Unversität Berlin with a Magister Artium degree in Art History in 2009. From 2006-2007 she studied at Goldsmiths College, London. Presently, she is a PhD candidate in Art and Visual History at the Humboldt-Universität, working and living in Berlin and Beijing.