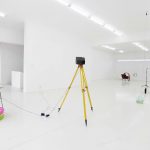 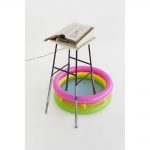 Yang Jian’s solo exhibition “Simple Mechanical” will show the installation and video work of Yang Jian in the past three years, and also his performance during the opening, presenting his repeatedly elaborated while unique themes on elapse and destruction.
As the most universal representative of modern civilization, simple machines are the advocators of the entire discipline system, the extension and suppression of human beings. While taking on different looks, they are all produced to meet specific needs, and have unknown potential to be discovered. It seems they never feel tired: rolling, sounding, shimmering, keeping eating up numerous electric and human power to maintain their functions. They force people to get used to the depressed desire, so that they become unconscious of living in the cruelty, and exhaust themselves day after day.
Born in Fujian Province in 1982, Yang Jian graduated with an MA from School of Fine Arts, Xiamen University in 2007. He was elected into the International Artist in Residence program of The Dutch Royal Academy of Fine Arts during 2009 to 2010, and was offered the sponsorship from Dutch Stichting Niemeijer Foundation. He currently lives and works in Beijing and Nanjing.