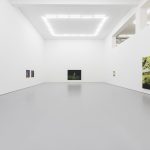 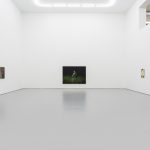 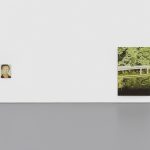 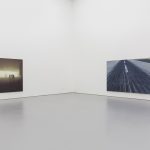 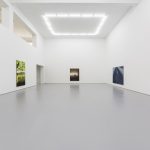 We are delighted to announce the opening of Wang Qiang’s fourth solo exhibition at WHITE SPACE BEIJING on October 21st, 2017. This exhibition will present the artist’s practice over the last two years.

Starting from the painting The Poet’s Winter, this exhibition reveals a restrained, poetic parallel world under its realistic appreance. The artist creates a continuous stream of consciousness with pictorial representations on canvas where melancholy is conveyed through light, breaking memories into isolated components—a female standing in late-night headlights; silhouettes glowing in the mist; shinning leaves at the water—and moving into figures against geometric color blocks. From the last ten years, Wang Qiang has been exploring historical signifiers and contemporary urbanism in his artistic practice featured realist techniques. Besides flatness and formal structure that has been evident in the picture plane, the artist’s new works deliberately exclude hints for time and location, elaborating emotional nuances to both respond and enrich previous creations.