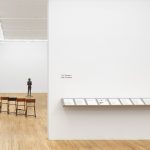 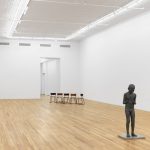 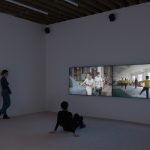 Andrew Kreps Gallery is pleased to announce Soft Dilemma, He Xiangyu’s first exhibition with the gallery, as well as the artist’s first solo show in the United States.

He Xiangyu’s conceptual practice manifests in multi-year projects that span sculpture, drawing, installation, film and publications. Emerging as part of a generation of artists who experienced the post-socialist state of China, He’s work looks to shift the viewer’s perception of cultural signifiers through an examination and manipulation of material. The exhibition highlights the divergent strategies used by He to investigate an array of clinical, social and anthropological themes, and his response to the ongoing political and existential crises in the world.

Upon entering the space, the viewer is confronted with Practical Opacity, 2020, a sculpture from an ongoing series that incorporates found school chairs, with doodles, scratches, stickers, and graffiti pointing to their prior careless, somehow violent use. Referencing the history of the readymade, the chairs are gathered together to form a matrix-like geometric composition of time capsules, carrying with them a history of restless behavior, apparently juvenile and innocent, that has today either dissolved or transformed into terrifying powers. He has also placed exact replicas of each individual chair at their base, following the same pattern, forming an arrangement that appears at once absurd, uncannily anthropomorphic, and esoteric. These small replicas are disquieting in appearance, contesting with the chair they replicate as if they were grown through some bodily, yet inorganic process, leaving the viewer to decide which chair is more “real”. In Corner, 2020, from the same series, He delicately removed one of the chair’s legs with a Japanese hand saw, and positioned the replica to highlight this absence, as if it is intended to function as a prosthetic limb.

He’s new sculpture Asian Boy, 2019-2020, recalls his earlier Cola Project, 2009-2011, in which the artist boiled 127 tons of Coca Cola, until it transformed into a rock-like matter. Asian Boy appears to the viewer timid, confused, and half naked, representing either the artist himself as a young man, or a generalized idea of someone from the East as suggested by the work’s title. The “Asian boy” holds tight with his slender fingers the absent can of cola, positioned as if he is going to open it and sip the modern time elixir for the first time in his life. At once private, and intimate, his sculpted image is tied to consumerist desires in the post-globalised, neoliberal world. Upon further examination, his position becomes eerily subversive, as his hands could also be pulling a trigger to detonate a grenade to devastating effects. This thread of self portraiture, and examination of modern societies extends to He’s work Thursday, 2018, in which a single egg rests on an egg tray cast from pure gold, as a reference to China’s controversial one-child policy, which was in effect when He was born.

In the gallery’s double height space, a monumental work from He’s ongoing Palate Project, spans two walls. He started the project in 2012, after he briefly lived in the U.S., where language barriers proved difficult to navigate. He began translating the ridges, bumps, and grooves of his palate through perceptions felt with his tongue, into various visual forms. The act of translation, always aimed at demystifying the subject, here only seems to further complicate it. The phenomenological processes responsible for constructing a sense of interior space intrinsic to vocalization, the curl of the tongue that produces “rat” as opposed to “that”, become a function of He Xiangyu’s body mapping, supplanting the oral, and aural, by reaffirming the centrality of visual representation. Identifiable anatomical structures dissolve and re-emerge, eventually evolving into color fields with only the slightest hints of form. Based on a seemingly obvious premise, Palate Project revels in a Cartesian split of mind and body, illustrating that, in spite of proximity to subject, art remains the annotation to a lost referent.

He’s two channel video Terminal 3, 2016-2019, presented in the adjacent gallery, was filmed over several years at Wuqiao Acrobatics School in Hebei Province, primarily attended by students aged 14-20 from Ethiopia and Sierra Leone. Xiangyu documented the intermingling of Christian and Muslim students, as they share a dormitory and prayer room. Moving from physical training to prayer, despite their collective experience, these students are immersed in absolute loneliness for the year long duration of their stay. In this kind of bizarre, rootless solitude, time and space become homogeneous and infinite, with only physical activity versus spiritual activity as the only boundary. This focus on the daily meditative and ritualistic routines also informs He’s practice, particularly his Palate Project, where the constraint of repetition proves in turn generative, producing divergent outcomes and possibilities.