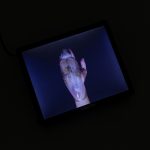 White Space Beijing is pleased to present Emerald, the first solo exhibition of work by artist Tong Wenmin with the gallery. The show will run from November 2, 2019 until January 18, 2020.

Tong Wenmin’s work often focuses on the intersection between individual perception and the external environment, stimulating visual poetry and inspiring action through behaviors that at first seem counter-intuitive. Through often simplified or regulated movements, her work hints at the allegorical character of the body and action within a semantically rich context.

Inspired by primitive jungle legends described by the French anthropologist Levi Strauss, the exhibition Emerald starts with a seemingly absurd story about a grandmother and grandson, exploring the ethical relationship between humans and nature, and its inversion.

Using self-discipline as a basic method throughout her travels, Tong Wenmin adapts to local conditions and uses materials found locally, bringing body and consciousness into a world of mutual sympathy. The work Crawl comes from the artist’s experiences in Fukushima and other places. Tong Wenmin connects dry tree limbs to her own and touches the ground, transforming into an elf-like form combining both the animal and vegetal. In different urban and creative spaces, she moves slowly and laboriously, as if passing through a dense forest.

In The Incomplete Body (performance painting and video), the artist “binds herself” with limited physical mobility. Spending nine hours a day over the course of five days, she paints an image parallel to the state of her mind and body on a 4.5 × 4.5 meter long sheet of paper that has been laid on the ground.

In other works made while visiting Malaysia’s Ara Dinawan Island, the artist stands, is suspended, or is caught amidst jungle foliage, limiting her range of action to the basic physiology of “breathing” and thus integrating into the environment. In another work she imagines herself in a field of burning banana plants with both feet maintaining contact with the earth. Visualizing the destruction caused by the burning, her upper body shakes uncontrollably. In the two works The Waves and Coral however, Tong Wenmin abandons active control of the body by the consciousness, instead being manipulated and dragged along by the flow of the tide and the waves…In these works, the artist does not presuppose any kind of dogma or moral principle. Rather, by taking personal transcendental action, she tries to recapture and interpret the animal-like and even plant-like perceptual instinct hidden within the human body and spirit. By limiting bodily postures and boundaries of action, the artist seeks to identify ambiguous areas of experience, thereby reexamining and forming new understandings of the connection between humans and nature.