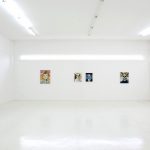 Jian Ce was born in Jinan, China, in 1984. She moved to Germany with her family when she was 4. Jian Ce studied Fine Arts at the Berlin University of the Arts with Georg Baselitz, Daniel Richter and Robert Lucander. The works shown in this exhibition were produced during Jian Ce’s residency in Beijing since April 2010. Before coming to China, The artist was for some time interested in mathematical and technical models, both historical and modern, which are used to measure and calculate reality. This includes our physical surroundings as well as the human body. Methods like proportion theory, physiognomy and biometrics, for instance, try to standardize and categorize the dazzling diversity of individuals, while suggesting a distant ideal of the human form. The empirical world on the other side is apparently “tamed” by scientific models, grasped in abstract symbols and graphics, and penetrated by scans.

This understanding of reality, along with its prolific imagery, seems to have influenced the way we look at pictures. We’re used to the double-character of images that demand both seeing and reading – and we’re used to not understanding many coded denotations, although we perceive them visually. The artist wonders how this ambiguous effect can be brought into painting, like laying a transparent film with coded information onto a “natural scene”. When the homogeneous picture is broken with contrasting elements and disturbed by some latent cut, it’s always like an uncertain experiment. And just as there is a wide range of means to synthesize those pictures today, the artist tries to use a variety of materials and techniques to interact with each other.

In Beijing Jian Ce was confronted with a forest of signs and marks, a labyrinth of roads and façades. One is expected to react as told, finding orientation among adverts, advice and clues. This urban nature is often manufactured, artificial, glossed over. Its signs and claddings are like a skin you can see as a beautiful pattern or landscape – or read and identify as codes and functional objects.

People seem to dissipate in this environment, merging with it. Beside the real crowds the artist was found crowds of plastic models. The artist was fascinated by their absurd idealized forms: half Asian, but always rather European, an impossible beauty standard for the common Chinese. Impossible that mixture may seem, but their looks reflect on the outside exactly the way the artist feels as a person between both cultures.