How to Define Space 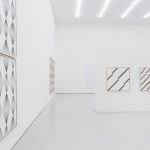 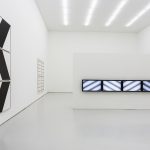 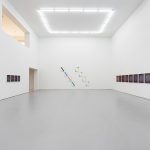 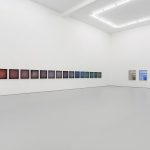 We are delighted to announce the opening of Ignacio Uriarte’s second solo exhibition at WHITE SPACE BEIJING on December 16th, 2017. This exhibition will present the most recent works of the artist, including drawings, paper installations and video work.

In this exhitbition, Uriarte uses an instructional title and basic Euclidean geometric elements to convey his understanding of abstract space. In mathematics, a space is a set with some added structure. Through configuring certain conditions in each work, the artist examines interrelationships in between movement, color, and space construction. By establishing a symmetrical layout in each gallery as a visual metaphor of certain social constraints and cultural norms, Uriarte not only tried to test boundaries of a given space or existing parameters, but to seek possibilities that could be realized in such norms thereby showing the limits of individual freedom in a society.

In one gallery, Uriarte creates spatial changes with matrixes of monochrome positive and negative space, lines, zig-zags, and scribbles suggesting architecural and choreographic associations. Vertical Rhombus Iteration is a series of drawings inspired by a iteration that mathematically is defined as the repeated application of the same process to already obtained results. A straight line is drawn repeatedly following a preconditioned system to shape a grid of rhomboidal groups of lines and their complementary empty spaces in between. The diamond-like black shapes and negatives vary in size and orientation, creating a sense of dynamic movement or flow. On each drawing of the 25-part Negative Light Matrix, multiple straight lines cover up the whole sheet of paper from border to border. The lines cross in one particular spot that changes its position according to the drawing’s position in the matrix. There seems to be a centrifugal force inside each drawing but also outside, ruling the positioning and movement of the crossings along the matrix. In the other room, Uriarte plays with four standard colors and continues exploring typical office objects to reflect on standardization and depth perception. In DIN System, four drawings in the size of A0 are filled with scribbles in black, blue, red and green, respectively. Aligned within the A0 format from the upper-right corner to the lower left are four decremental planes ranging from A1 to A4. Each plane is exactly half the size of the previous one, and the density increases along with the reduction of space.