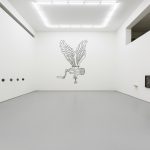 We are delighted to announce the opening of Gao Lei’s third solo exhibition at WHITE SPACE BEIJING, “Wilderness” will open on September 3rd. This exhibit will present brand-new aspects of the artist’s most recent creative contemplation and artistry.

Gao Lei has focused on collecting and presenting the conflicts between the individual motivation and the social system in his works which are extremely quiet, regulated and subdued. Those installations, paintings and photographs shows the artist’s expert mastery and graftage of various mediums and materials.

This exhibition of his recent creations is displayed as two parts: to explore and construct a pluralistic world by using various types of medium; and how to make such multifarious and disordered world be compressed and undifferentiated in a mode of linear transformation to be standardized materials which can be manageable and editable. The first part depicts that the world is composed of material, information, hallucination and netherness. In this world, the concepts of origin of species, evolutionary history, virtual identity, meditation, and the other side of life are interrelated and integrated to form a diverse unity. The second part depicts that the regularization and standardization of industrial system controls and occupies the society to be vectorized and instrumentalized where life is sketched as symbolized combination of industrial products.

The juxtaposition of these two parts by the artist is not aimed at producing some kind of comparison to rouse and restore the diversity and mystique of the world. It seems that people living in this modern society are more adapted to survive in the single homogenized system, and keep continuing to disengage the relevance and experience from the real-world in the process of producing and consuming. This process is just same as to reconstruct and synthesize the Self as a body without organ then abondon it into the wilderness.