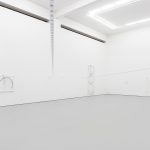 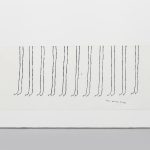 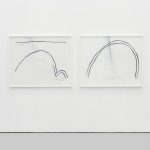 We are very pleased to announce that artist Christine Sun Kim’s first solo exhibition in WHITE SPACE BEIJING “Piano within Piano like a Lunch Sandwich” will open on June 13, 2015.

Kim’s artistic practice relies on conceptual and technological methods. Through drawing, performance, and discursive approaches, she has redefined her own voice. While doing research, she discovered that both sign language and music had a similar sense of space and that this could be made into a visual process, like symbols appearing on paper. By using the sense of movement and physically expressive grammar of American Sign Language, combined with basic musical notation, the artist creates a humorous and poetic expression of her experience of sound. For example, in an eponymously named piece, Kim takes musical notations for decrescendo (piano and pianissimo) and, using the principles of word-building, achieves an astonishing similarity to the concept of sound and whose visual form resembles rather playfully that of sandwich.

What Kim hears and sees in Beijing, initiated her to rethink the connection between the past, present and the future. The sound installation “Game of Skill”, she invites audiences to listen to a recording of a text she wrote regarding the future, though the customized handheld listening device makes hearing difficult; her hope is that this intentionally difficult listening experience will lead each individual to be aware of the passivity implicit in this everyday behavior.

Christine Sun Kim was born in 1980 in Orange County, California. In 2002, she graduated from Rochester Institute of Technology with a Bachelor of Science. She received a master degree from New York’s School of Visual Arts in 2006 and a master degree in music/sound from Bard College in 2013. Her recent exhibitions include “Silence, with Chelsea Knight”, New Museum, New York, USA; “Almost A Score”, Arnolfini Centre for Contemporary Art, Bristol, UK; “as well as Soundings: A Contemporary Score”, Museum of Modern Art, New York, USA. She currently lives and works in New York, USA and Berlin, Germany.