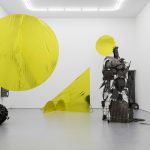 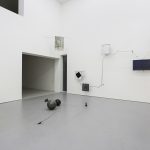 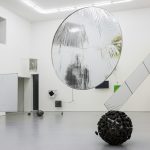 WHITE SPACE BEIJING is delighted to announce the opening of Yang Jian’s fourth solo exhibition The Times Impossible to Encounter; The Gaze from a Composite Leviathan on October 27.

The exhibition is comprised of two independent yet intertextually intertwined sections, continuing Yang Jian’s longterm exploration of topics such as space-time, polarity, the peculiarity of power, and the essential absurdity of civilized human life. The exhibition features more than ten entirely new works, including painting, video, sculpture, and installation.

A single channel video piece, Trimming Time , leads viewers into an “arrow of time” wrestling ring to commence leaping back and forth inside. Five gigantic geometric forms, made of survival blankets purchased on Taobao, represent an investigation into the ultimate truth of “supremacy” in art and breath life into the space. Situated opposite these forms is an iron line graph depicting trends in Taobao consumption data with six abstract line structure and reference compositions clustered at its peaks and troughs. This is an exploration of ideology, cognition/self-awareness, and the hidden rules behind meta-painting, while simultaneously hinting at the entropic association between time, vision, and culture.

In the other part of the exhibition, Yang Jian draws upon and recreates a visual experience of his personal familiarity with the public discipline system. Made of lead, A Composite Leviathan diverts and synthesizes the visual form of public sculpture from various shapes found in squares, parks, shopping centers, and other urban spaces. It intends to highlight how the sculpture of capital and power has been continuously cut, polished, and pounded to ultimately become another indescribable monster. Tumbleweed is spherical installation entirely covered in surveillance lenses, programmed to move slowly and unpredictably, and wirelessly linked to a set of three monitors mounted on the wall. Viewers can only rely on the monitor screens to faintly determine the relative position of the three operating surveillance cameras (which are capturing every movement in the space) and view them in reverse, but there is no way to judge the operating status of the other surveillance lenses. These lenses thus form a surveillance blackhole.

In Run-over Dinosaur, using VR equipment, viewers temporarily leave the exhibition hall and observe the scene of an accident wherein a dinosaur is run over on the expressway. Under the attentive gaze of the audience, prehistoric, contemporary, and future time here have a brief encounter in an absurd way.