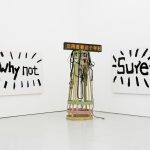 During the past one year and a half since Tan Tian’s first solo exhibition finished, the artist came across some events that touched him. Tan Tian transformed the events or words related to the events into artworks, in order to express his feelings when he was involved in those events. For example, the installation Group Show Curator represents a conversation between a curator and an artist, when the former is asking the latter to provide an artwork of smaller size and brighter color to fit a new gallery show, though this request has little to do with the conceptuality of the work in relation to the exhibition. Through his works, Tan Tian demonstrates the current situation of contemporary art, which is largely driven by the art market: certain artists are loosing their independence.

Actually, “Welcome” as Tan Tian’s second solo exhibition is one chapter of the artist’s long-term conceptual project of questioning. That is, Tan Tian identifies what kind of artist he does not want to become by making works according to some problematic artistic methods. To be more specific, Tan Tian questions if a contemporary artist could be formulated by studying the way other successful artists create art in his first solo exhibition; in the second solo exhibition, Tan Tian questions if it is worth sacrificing one’s artistic independence in exchange for commercial recognition. In essence, the artist is constantly materializing his questioning via artworks. It seems that the artist’s questioning project will not be finished, until he figures out what kind of artist he wants to be. Currently, it is the course of his exhibition history that counts, because this path founded on questioning might lead to an alternative identity and reality of the artist in the future.