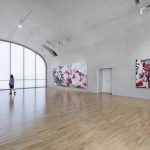 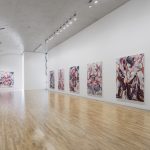 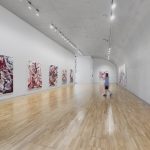 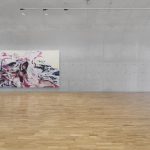 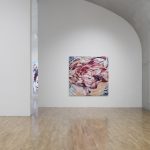 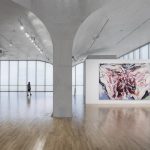 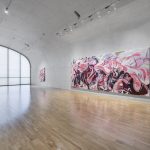 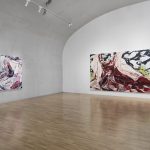 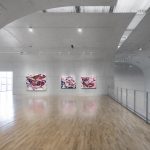 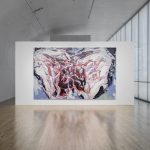 From September 3 to October 16, 2022, Zhang Zipiao will present the solo exhibition “Moonquake” at Long Museum (West Bund). The first institutional solo project in the Mainland, this exhibition will include the artist’s 23 latest works on canvas from the past two years.

The moon is traditionally associated with the female body, emotions, aesthetics, and literature in various cultural contexts and has long been associated with irrational psychological states. Beneath the seemingly calm surface of the moon, a relatively mild, imperceptible, but persistent type of quake often occurs – the moonquake.

Although the exhibition is entitled “Moonquake,” the works do not directly depict the moon as an image; instead to suggest the complex mental condition of contemporary people, the richness of women’s emotions, and the connection between the act of painting and the depth of human consciousness: in moments when the despair, desire, and hope under the calmness, shape a transient tension between repression and release.

The works in the Battlefield series extend and deepen the artist’s earlier discussion of the body as a register for projected mental, emotional, and spiritual conditions. As the title suggests, the body is a field of external or internal confrontation with the other or oneself. The bodies in the artworks are becoming increasingly abstract; even the skeleton that once served as a pictorial structure is no longer visible, replaced by “masses” of flesh shaped by flowing curves. These “masses,” as the basic unit and structure of these works on canvas, are distinguished by color differences at the edges; their vicissitude and often contradictory lines bring confrontation and division, while the naturally flowing or mutually obscuring pigments either tangle or merge. As a result, the static images acquire a compelling dynamic, revealing the artist’s state of body and mind at the time of creation.

At the same time, the diptychs and triptychs in this exhibition allow the artist to expand the scale of her work further (e.g., Battlefield 05 measures 6 meters wide), which does not only enlarge the picture’s dimension: the diverse and vibrating emotions come to the fore more directly and intensely. At the same time, the growing scale of her work demands greater intensity. How to manage the increasingly complex overall structure and detailed structures, integrate the ever-changing details of color and brushwork, and continuously mobilize one’s emotions, inspiration, explosive power, and stability become questions the artist had to address. In a sense, this series of works marks a back-and-forth “battle” between the artist and the painting medium.

In addition, if we were to consider Pomegranate 05, Grapefruit 02, Octopus and Mother of Pearl 02 as the artist’s long-standing extension of the proposition of animals and plants as flesh and vitality, then Candle, Mushroom Cloud 03, and An Island 02 embody her “moonquake” – like empathy for the things around her, and projecting these relationships mentioned above between mind and body into a broader and universal world. Thus, beneath the overall sensibility shaped by the works in this exhibition, we get the sense of Zhang Zipiao’s intellectual drive embedded in the efforts for her painting practice, which has become the register to experiment and represent her spirit and worldview.