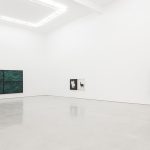 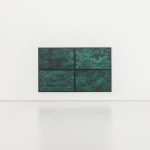 Back to the Footlights Tomorrow is Xie Fan’s second solo exhibition at WHITE SPACE BEIJING since The Layers, showcasing his latest works.

The exhibition title Back to the Footlights Tomorrow appropriately describes Xie Fan’s creative process and state of being. Xie Fan chooses to work and live between Beijing and Jiang You, Sichuan Province, away from a centralized geography so that he maintains a relatively independent mode of thinking and creating. In his recent works, Xie Fan is cautious about ideas established by the system. He intentionally keeps a distance from the familiar methods of painting, renouncing the traceable empiricism and weakening the subjectivity and significance of techniques. Such escape from conventions originates from Xie Fan’s reflection on painting itself. When the body and the mind have developed a reflex to process then produce images, the artist would much rather reach a poised and calm state and retreat to the inner self, letting go of the so-called painting techniques to be close to the heart again and to explore images in a primitive way.

Unlike the previous landscape works, animals and human figures have returned to Xie Fan’s paintings.
The addition of life into the broad and blank backdrop reduces the desolate distance. Void of any context, the forward movement of a deer or the old man looking back accentuates the stagnant movement. In the mind of a young artist, old men are equivalent to ancient history, and with this recognition, the old man implies the passing of time. The overlap of emotions and imagery adds complexity to the painting.

The dissemination of emotions is not only apparent in the change in presentation but also in the continuation of the past subject matters. In this exhibition, there are two sets of polyptychs, Winter and Summer. They inherit the ubiquity of plant details in the previous works but disintegrate their overwhelming dominance of the canvas, which allows the meticulous details to strengthen the chaos. In his narrative of nature, Xie Fan uses the bodily sensation of time and climate as the source of his images. Relatively conservative with the range of colors, Xie Fan uses black and green to depict the unbearably long and monotonous winter and summer at the face of short but lively spring and autumn. Behind such choice is Xie Fan’s own appreciation and understanding of time. Consistent with his focus in the visual world, Xie Fan creates a parallel between the continuous imagery and the interrupted blankness, infused and saturated with emotions.

Perhaps, one can never completely get rid of old habits. Therefore, in Xie Fan’s new works, the details of colors and imagery are still visible, but the artist’s introspection has added complexity and strength to them. Perhaps, this is akin to people’s common misreading of Xie Fan’s landscape on silk. “Mountains may be mountains, but mountains are not just mountains.” This question without a concrete answer might be resolved when back to the footlights tomorrow.

Xie Fan was born in 1983 in Jiangyou, Sichuan Province and graduated from Sichuan Academy of Fine Arts in 2005. Currently lives and works in Beijing and Jiangyou.