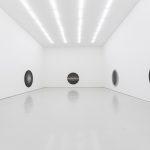 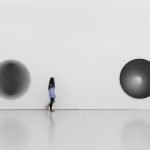 As one of the leading representatives within the practice of Chinese formalism, Liu Wentao seeks to revisit the pedagogical tradition of the sketch established by the modern art education in China, looking to experientially transform and integrate the qualities of its geometric pattern and modernist form. The paintings currently on display in the exhibition employ a circular canvas as a base, whilst again revealing the distinctive forms of the artist through his unique technique of drawing. He uses a pencil and ruler to complement one another, additionally using a mathematical model to repeatedly draw lines, not only rendering material the captivating, subtle reflections of light, but they also construct the manifold spaces of flatness within his work. Moreover, the artist draws upon the Chinese character ‘元’ and its English equivalent, the word ‘meta’, as the motif for the exhibition. On the one hand, he evokes ‘圆’, another similar sounding character to ‘元’. Besides suggesting a formal framework for his latest paintings, this also functions as a foundational image to give a sense of temporality to the canvas. On the other hand, ‘meta’ in English indicates a connotation to the concept of transformation, but another intended purpose for this is to reveal within the artist’s practice, discourses behind China’s modernity, and its awareness to time.
Liu Wentao (b. 1973, Qingdao, Shandong Province, China) studied at the Printmaking Department of the Central Academy of Fine Arts (CAFA) and the Art Department of the University of Massachusetts, Boston, USA. Recent exhibitions include The world is yours, as well as ours, White Cube, London, UK (2016); Liu Wentao Works, ZAN art museum, Qingdao, China (2015); Art Project 24: Naissance, Today Art Museum, Beijing, China (2015); New Generation of Abstract Art, Sishang Art Museum, Beijing, China (2014); Xuan, White Space, Beijing, China (2014); Light and Shadow, Shanghai Art Museum, Shanghai, China (2012). Liu Wentao currently lives and works in Beijing, China.