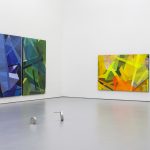 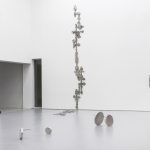 We are very pleased to announce the opening of Qin Jun’s first solo exhibition at WHITE SPACE BEIJING on April 25th. He will be showcasing his most recent works in painting and sculpture.

As a rising artist, Qin Jun attempts to alternate his concepts between spatial cognition, and a kind of generalized plane of consciousness by using abstract visual forms. For Qin Jun this study has been an ongoing process, which he developed during his education as a sculptural artist. Whether through sculpture or painting, Qin Jun’s work always follows a strict set of particular preordained rules regarding form. However, within this self-limiting framework, he still manages to bring forth a kind of visual structure that is both rich in emotion and possesses an inherent intensity. Qin Jun’s sculptural work utilizes basic geometric principals like rectangular, spherical, and triangular shapes. The modular representation suggested by his work follows a kind of standardized of installation method which links the elements of his pieces together. Although the relationships between elements in his work appear random, they are joined under the premise of a kind of modern socialized production; the flexible surface of his work is actually subject to a kind of linear logic. Meanwhile, in contrast to the diffused sense of space that his sculptural works create, Qin Jun’s paintings display an inward sense of contraction. Although his two sets of paintings were made according to different formal rules, they still share similarities. Broken up into basic, two-dimensional elements, Qin Jun’s paintings interpret color as punctuation of sorts for shadow and volume. He thus takes sculpture’s spatial sensibility and projects it onto a two-dimensional surface, rupturing the spatial conventions of painting and reshaping our notions of gravity and observation.

Qin Jun was born in 1987 in Liaoning Province. In 2010 he graduated from the Dalian Polytechnic University, Dalian, China with a degree in Sculpture. In 2012, he received his MFA in Fine Arts from the University of Southampton, London, UK. Qin Jun now lives and works in Beijing.