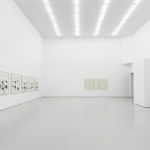 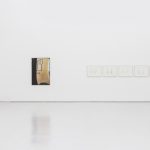 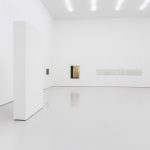 WHITE SPACE BEIJING is delighted to announce the opening of Christine Sun Kim’s second solo exhibition With a Capital D on October 27, 2018.

In this exhibition, text and language continue to act as the driving forces behind Kim’s creative process. Her new drawings, as well as a new video piece created with long-time collaborator Thomas Mader, explore her cultural identity and ties to the Deaf community. Kim’s artwork generally uses the American Sign Language (ASL) system as its foundation. Through it she demonstrates how to use her works as linguistic and sociological tools for accessing identity politics in the current political climate in America.

In Words>Shape>Reality, Kim points out the interconnectivity between ASL and English, both spoken and written, and illustrates the differing efficiency of both systems. In English vs Deaf English, she presents two contrasting types of “English” in order to demonstrate the efficiency of untranslatable ASL concepts. It is worth noting that ASL does not have a written component like most other languages, so some expressions rely on loan words from spoken English; in Looky Looky, her video collaboration with Thomas Mader, non-manual signs are used to express the subtle rhetorical and referential power that facial expressions possess. Given the right linguistic skills and context they can create a fully functional communicative situation, even without the additional use of hand gestures. With these works, Kim transforms an often all too mechanical and limited understanding of ASL as a language.

For With a Capital D Kim also investigates Deaf group culture and the hows and whys of shared Deaf social experiences. Degrees of Institutional Deaf Rage, Why I Work with Sign Language Interpreters, Why My Hearing Daughter Signs borrow geometric angles and statistical pie charts to describe the conditions and attitudes Deaf people encounter in everyday life, institutions or even within the art world. They use a model of rhetorical questions and answers to describe a variety of social encounters in a world dominated by spoken language in a highly perceptive and often (painfully) funny way.

German linguist Edward Sapir claimed that language determines our worldview; on the one hand, language restricts our understanding of the world and our potential to transform it. At the same time our understanding and transformation of the world can in turn itself be viewed as a sort of language. While the title of the exhibition seems idiomatic, it is in fact an expression used to dissect complex processes connected to objects, situational conditions and communicative qualities. The capital “D” emphasizes the word “Deaf”, its collective cultural identification and subjective consciousness. Unlike the adjective “deaf” it is not used to scrutinize and measure the “other”. Kim’s work uses rhetorical methods, including intertextuality, questions, double entendres, substitution, progression, and analogies to show the unique perception and culture of ASL users. The artist considers this show an homage to all the Deaf people in her life.