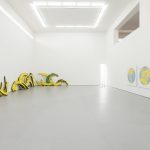 The term of “Goulash” was firstly known to the artist from his father’s bantering appropriation of Nikita Sergeyevich Khrushchev’s quote to celebrate of achieving Communism in their family life. Later, through Liu Xinyi’s verification, this joke first appeared on the “Cankao Xiaoxi” (Reference News) published by the Xinhua News Agency in 1958 from Khrushchev’s visit to Budapest and his mention of a local dish, the Goulash. By which, Khrushchev envisioned a future with prosperous social imagination for the Hungarian people. Nevertheless, the metaphor brought the precise politics relevant to everyday customs of general public. Interestingly, the Chinese interpreter translated the dish according to the Chinese linguistic context, which left an even lasting impact in China. Regardless of the editor’s translation of foreign ideas and its response to this explanation in China at that time, the historical sample highlighted inspired the artist’s new understanding of his own practice. For example, how to deconstruct visual elements behind complex political concepts through the analysis of its menu structures; how to quarantine these mutually effective elements from their original discourses as well as the diverse potential embedded in visual understanding of political knowledge.

In this exhibition, Liu Xinyi experiments with this work approach. He adopts the visual elements of national emblems of defunct socialist states that once ruled by communist ideology as his resources, while combining with his interest in the various political subjects the world confronts today, to endeavour on a playful journey of interpretations.

Liu Xinyi was born in 1982, Hangzhou, who has studied sculpture at the China Academy of Arts, and MFA course at Goldsmiths College in London, now, living and working in Beijing. His recent exhibitions include, “Contemporary Photography in China 2009-2014” at the Minsheng Art Museum, Shanghai; “Pull left: Not Always Right”, Urban Arts Space, Ohio State University, Columbus, USA.