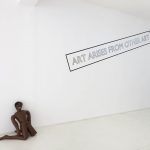 Li Jingxiong’s first solo exhibition “LeJX” in Beijing, showcases six of Li Jingxiong’s latest artworks. “LeJX” stands in the obscure terrain between Western and Chinese cultural context, implies a suggestive direction to the theme of the exhibition: it is a metaphorical game about geographical art.

In the past few years, Li gradually gained recognition with his extremely exceptional conceptual practice. Having a suspicious attitude towards the identities of artists, Li discusses how the present system influences artists identities through a series of threads, including “death” (biological factor), “geography” (physical factor), and “history” (time latitude). He temporarily abandons his decade-long education background of painting that he is very familiar with, and tries to intervene contemporary practice from a completely new perceptive.

Li Jingxiong gives up individualistic and intimate expressions, imports even more fierce and brutal bodily elements such as plasma and urine, and mechanic arms, to shockingly challenge the ordinary condition audiences are used to experience. At the same time, the core of Li’s work often involves metaphors in the name of art that raises assumptions internally, and construct self-responsive mechanisms by applying seemingly unrelated fragments of words. The artist sees his personal practice as a geographical identities switching intellectual game, which is based on the overlapping of texts and aesthetics.

Li Jingxiong was born in 1987. He graduated from Nanjing University of the Arts with a Master’s degree. He now lives and works in Nanjing. Recent exhibitions include “The Invisible Hand: Curating as gesture-The 2nd CAFAM Biennal”, Cafam, Beijing, China. “The Garden of Diversion”, Sifang Art Museum, Nanjing, China.