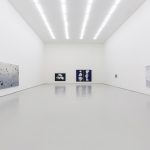 We are delighted to announce the opening of Shi Zhiying’s fourth solo exhibition at WHITE SPACE BEIJING on October 21st, 2017. This exhibition will showcase the most recent paintings of the artist.

In “Stones,” Shi Zhiying converts a canvas into the vehicle of real rocks, establishing a juxtaposition between painting and the object beyond image layers where color, paints and objects are no longer physically isolated. The artist conveys existing status of a substance via visual language, examining a co-existance of time and space, macrocosm and microcosm in one single matter. Rocks eliminated background information are expressed in solid or softened brushstrokes. Spatial structure, color and lines works together to highlight a circulation between menifestation and dissolution. Capturing a slow but consistant transformation among substance, canvas, existing status and emotions, the artist develops a landscape for meditation and invites the viewer to perceive the vastness beyond the picture plane.