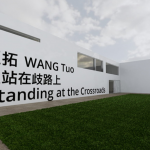 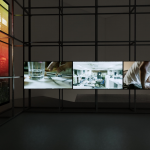 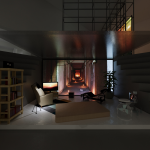 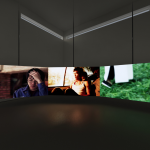 White Space Beijing is delighted to announce Wang Tuo’s second solo exhibition, “Standing at the Crossroad,” will be launched online on April 30, 2020, comprises of five works of single-channel videos, multi-channel videos and video installations Wang Tuo has completed over the last two years.

Amid this turbulent time when the world is in turmoil, how should an individual handle oneself, make choices, and move forward against the grain? The title of this exhibition draws from Lu Xun’s Beijing Communications published on the Supplement of Henan Journal in 1925. The writer offered various advice to the youths at the time on “survival,” “livelihood,” and “development,” as well as on choosing between abiding to “ancient adage” and the pursuit of “freedom.” For the people living in the present, the condition of the world has become more fragmented and complicated. The differences in people’s actions have only become more disparate. Hence, could returning and re-estimating this crossroad, again and again, become the imminent decision for the present? Appropriating this title for the exhibition could be considered a response from the artist today to the then writer a century later.

Staged in different contexts, these tragedies present the seemingly reincarnated and uncanny properties through the artist’s juxtaposition and regrouping, to point at the often overlooked, details embedded deeply in these contradictory sites. If “God exists in the details,” then for Wang Tuo, these details are implicit in the process of turning a verb into a noun: act/action, perform/performance, move/movement. The action builds behaviors that induce a state of affairs; the state of affairs develops into action, involving structures engrained with meaning. Without a temporal frame, these structures underscore the past, imply the present, and predict the future. By rehearsing and reversing this process repetitively, a contemporary apocalypse consists of the body, documentations, concepts, narration, and aesthetics, is revealed.

Fiction mottles reality; desire overlaps memories. These five works of moving images, which come from diverse sources and head in divergent directions, invite people from all walks of life to conjure in the virtual exhibition halls.