The City and The Dogs 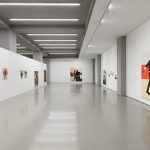 Francisco Rodríguez’s first solo exhibition at WHITE SPACE “The City and the Dogs” will open on November 5, 2022 at the gallery’s Shunyi location and be on view until January 15, 2023.

Rodríguez’s paintings draw from his memories of Chile, modern Latin American literature, the traditions of Western art and Eastern visual culture, particularly ukiyo-e and anime. Within the narratives of his paintings, the twilight hour comes to represent the struggles of adolescence, while hysteria spreads through the crowd like a plague.

The title of the exhibition references La ciudad y los perros (The City and the Dogs) a contemporary novel by the Peruvian writer Mario Vargas Llosa. Set at the Leoncio Prado Military Academy in Lima, Peru, the novel depicts the harsh life of several young cadets and their conflicts with the school authorities. Like Llosa’s novel, Rodríguez’s paintings have shifting perspectives and narrators. Set against the backdrop of Santiago, at the western edge of the Andes, the spectator is emersed in a brutal story of adolescence.

In Rodriguez’s painted odes to youth, the crescent moon or the blazing sun hangs alone in the sky, with swaying trees and silhouetted mountains marking the horizon. Birds in twos and threes move from sky to telegraph pole, while an omnipresent humming sound pervades the empty city.  Wooden fences and brick walls form a maze-like structure blocking the view: there is danger, but no path of escape. Here, the adolescents appear, often alone, their overconfident footsteps stirring up dust in their wake. Fingers tremble lighting cigarettes, as they walk, stand, and lurk like wild dogs ready for battle. The setting sun has left a burnt glow on their cheeks, and they force a smile, inadvertently revealing the peculiar melancholia of youth.

If the city is the battlefield for these young people, then their homes and classrooms are like caves and spiritual shelters where they can rest their bodies and minds. They lie comfortably in bed, listen to music on a cassette player until they fall asleep, immerse themselves in quiet reading, or indulge in intimate moments of sexual pleasure. Rodriguez’s largest triptych to date shows a semi-autobiographical classroom devoid of people. Instead, it is populated with scattered desks scribbled with teenage thoughts, a blackboard showing the geography and arts of Latin America, portraits of revolutionaries and warriors, and pictures from exotic Eastern countries; a multiplicity of ephemera all capturing the daily interests and influences of the teenagers to whom the classroom belongs.

The adolescents will have probably forgotten the mundane details: the sheets on the then familiar bed, the wounds that had not been licked clean, the loneliness so hard to dispel. At the time, they opened their eyes wide, panic sharp like an iron nail as they tried to grasp a glimmer of light in the darkness. Night falls and wild dogs in the city bark like ghosts, as if to break the silence that frightens them.