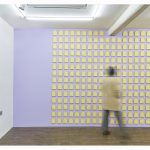 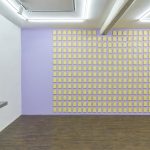 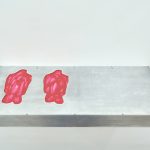 Introducing the 2016 exhibition “Painting 2.0: Expression in the Information Age”, Manuela Ammer, Achim Hochdörfer and David Joselit write: “In spirited opposition to canonical investments in medium specificity, twenty-first-century painting has incorporated a broad range of “alien” objects, such as readymades, advertisement, film, video, and performance, into its procedures.” “Interactivity” is also apparently a master word here (“…painting has grown interactive…”). Considering also the fact that, as the curators themselves concede, the exhibition that deals with new kinds of painting “self-consciously and purposely addresses a Euro-American history of painting, and even more specifically a predominantly (though not exclusively) German and American tradition,” we can quickly start – and just as quickly end – the opening of our statement regarding Gao Ludi’s presentation at Wyoming Project “Painting Blind, or, a History of Abyssal Movements” by making clear that, it at least speaks of two matters: first, the will to both painting as action and painting as object. We are to suspect that the verb is, before anything, interested in eliminating the noun, or vice versa (that is to say, we are also interested in the idea of getting rid of the painting subject. Yes you can have a refund but you cannot have your subjectivity back, painting no longer means self-assurance for you or anybody else. And yes we can save quite some money buying canvas). We are to speak of painting no more.

Secondly, we are to also look at interactivity, because this interactivity is not something we can properly interact with. In our limited, Chinese speaking context, at least two writers have in recent time addressed the problematic of the blind, in relation to Gao’s art. We are only to suspect further that, a new body of painterly work (what were we saying just now?) as such that deals hungrily with senses other than sight paves a way for the blind (blind hunger even), for an interactivity that is at least totally sabotaged.

Incidentally, we have been dealing very frequently with Alice in recent time. We are amazed and mesmerised. The works in the exhibition here take (again) as their point of departure the story of Alice in Wonderland, especially the fall (that is, again, most beautifully described by Jean-Luc Nancy.). In spiraling repetitions, are we already falling into the abyss without knowing too much of it? Rent’s true waste then.

Many thanks to WHITE SPACE BEIJING for the gallery’s generous support of the exhibition.