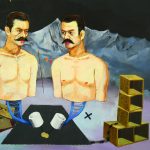 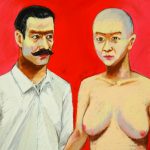 Freud, Fish and Butterfly is Wang Haiyang’s first animated video work. This animation experiment was made through repeated painting onto a single sheet of sandpaper. The finalized version can be seen hanging on the wall at the end of the video. The painting not only illustrates the procedural nature of painting, but also explains how, for Wang Haiyang, animation is a form of painting in which scenes shift: the artist makes objects transform naturally, only retaining bits and pieces here and there, e.g. a mouth cavity or genitals, as visual pivot points used in this process of transmogrification. Butterflies, embryos, fish bellies, the insides of an egg. The self-replicating shapes of these objects remind the viewer of the dual continuations of characters in the artist’s early work series Boys. Guided along by coloured chalk, the visual logic of these objects resembles the language of dreams, much like what is proposed in psychoanalysis: metaphor and metonymy. For the artist, the significance of realistically depicted WWII German military officers or Martin Kippenberger’esque character portrayals, lies in the fact that they become metonymically erased. This work also does away with definitions regarding the direction in which frames ought to progress, as well as conventions of scenic framing. Much of the imagery in this video is further developed by the artist in subsequent artworks. The delight of art making lies precisely at the moment when these forms are cultivated further.